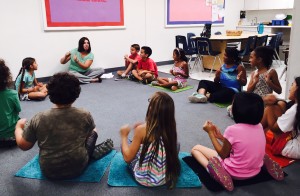 Language is central to memory, expression, and thought i.e. human intelligence. Due to Khalsa School’s location in the southwestern US, Spanish is the logical choice for students’ study of a second language.  Of course, the study of Spanish develops the conversational fluency that is valuable when traveling to Spanish speaking countries and when conversing with local Spanish speakers.  Learning Spanish begins at primary and by the end of Upper Elementary students are reaching proficiency in reading, writing, and speaking Spanish.

A great additional benefit of studying any foreign language is the analysis of the structure of language.  Starting even in primary, Montessori students begin to identify and symbolize parts of speech.  By Upper Elementary, students analyze complex sentences both in their own writing and in the writing of others. In fact, our Spanish teachers are always amazed at Montessori students’ knowledge of grammar far beyond that typical for elementary students.   When students realize that knowledge of nouns and prepositions, adjectives and adverbs, pronouns and verb tenses are useful not only when writing in English, but also when learning a language other than English, their eyes are opened to the underlying structure of language in general.   Learning a romance language also builds vocabulary by reinforcing meanings of Latin roots.

Moreover, learning a second language cultivates knowledge of the world and respect for different cultures.  The study of foreign language cultivates awareness of the importance of communication to civilization and the commonality of all people regardless of language, customs, beliefs, or geographical location.  Many studies have shown that learning more than one language builds intelligence and awareness.