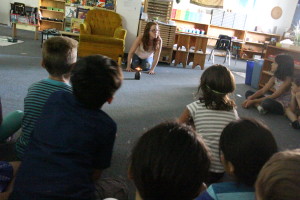 During the first half of the twentieth century, Maria Montessori, an Italian doctor and scientist, researched and applied her ideas about education and child development. Since then, neuroscience has consistently corroborated her ideas. Montessori, a Catholic, conceived her idea of cosmic education during the seven years she spent in India from 1939 to 1946. It was then that her understanding of spirituality and the purpose of life enlarged to include an eastern perspective, which balanced her more rational and scientific foundation. She said, “If education is always to be conceived as a mere transmission of knowledge, there is little to be hoped from it in the bettering of man’s future. For what is the use of transmitting knowledge if the individual’s total development lags behind?”

Montessori’s recognition that 3-6 year olds grow and learn by manipulating the tangible world with their hands is well-known. Less well known is her understanding that the elementary years are the sensitive time for mental manipulation of the intangible. The second plane of development (from ages 6-12) is characterized by the child’s capacity for imagination. Montessori viewed imagination not as fantasy, but as the ability to visualize and manipulate mental images.

After age six, children become aware of themselves within time and space. Now, they know there is a universe beyond their own backyard. Elementary is the time when the child wants to understand the entire universe. They ask very big questions. Where did I come from? What happened before I lived? What is fair? What is ‘good’? What is ‘bad’? What is right and wrong? How big is big? How small is small? How far is far? What is my job? Who do I want to be? Why are things the way they are?

In contrast to primary, elementary is the time for students to create stories, poetry, skits, and artwork. The elementary student’s development corresponds to that time in history when human beings lived in groups, wondered about the meaning of the stars in the sky, and communicated through pictures on cave walls. Since story has been the vehicle for transmitting culture since the beginning of man, the Five Great Stories/Lessons are sparks that ignite the child’s imagination and light her spirit.

The Great Lessons allow the child to place herself on the timeline of history and on the map of the universe. The Story of Creation, the Coming of Life, the Coming of Humans, and the Stories of Writing and Numbers are not meant to impart information. These stories are a framework within which we nurture the child’s enthusiasm for life, awareness of themselves as heirs to the legacy of history, appreciation for the beauty and diversity of existence, love for the order and plan of the universe and desire to fulfill their purpose within it. The Five Great Stories/Lessons are presented impressionistically because they instill in the child, not facts, but love and joy. Ahead of her time, Montessori believed, “The child should love everything he learns, for his mental and emotional growth are linked.” This love motivates all work undertaken.

As such, when Montessori’s writings were originally translated to English, terminology was coined that is generally not used today outside of the Montessori community. One of these terms is “impressionistic”. When Montessori used the word “impressionistic” she was describing lessons in the tradition of storytelling with props designed to give the child an experience or “impression” of time, space, and concepts that would not be possible if tied only to facts and figures that are meaningless to children. Scientific terminology may be used, but the direct aim of an impressionistic lesson is to inspire awe and great respect for the immensity and wonder of the earth and life on it.

Montessori was one of the first educators to understand the importance of appealing to the elementary child’s emotions – their innate curiosity, wonder, and love. It is this passion and desire that motivates independent investigation, discovery, creativity, effort, and learning. Impressionistic lessons are sagas that make a big impression. The Five Great Stories became the framework within which Montessori described the entire cultural curriculum – geography, geology, astronomy, natural history, world cultures, biology, & physical science. From this framework springs the vast variety of topics that students then explore both independently and collaboratively.

Through the impressionistic lessons of the Great Stories, we impress the child with an appreciation of their own humanity and their place in the universe. Students experience awe and wonder; the value of life and their own existence; purpose in everything; a conviction of order in the universe; delight for their place within it; and a sense of personal responsibility. Impressionistic stories, and the emotions associated, will remain deep in the child’s psyche forever. Cosmic education offers a context for all future knowledge; and by developing the child’s awareness of the interconnectedness and unity of all, a spiritual context for “the total development” of the child.